If you work in a business setting, you’ve probably heard, or even used, at least one of the many cliche business terms that float around most offices. From bosses strategizing on how to get the “biggest bang for their buck” to a coworker sending you a slightly passive-aggressive email that starts with “Just a friendly reminder…”, it’s everywhere and it can be equal parts annoying and exhausting. Business jargon has become so overused that it often lessens the impact of what’s being said and undermines the credibility of whoever is saying it.

At GetResponse, we aim to help individuals relay strong and persuasive messages to their audiences. Accordingly, we thought it would be interesting to find out exactly which common business phrases are the most used, and the most hated, in the business world.

To gather our data, we surveyed over 1000 people across different ages, industries, and locations. We were able to pull insights from our responses to see information such as the most common terms heard, the most annoying terms, and the most passive-aggressive terms. To see what we found, check out the information below. 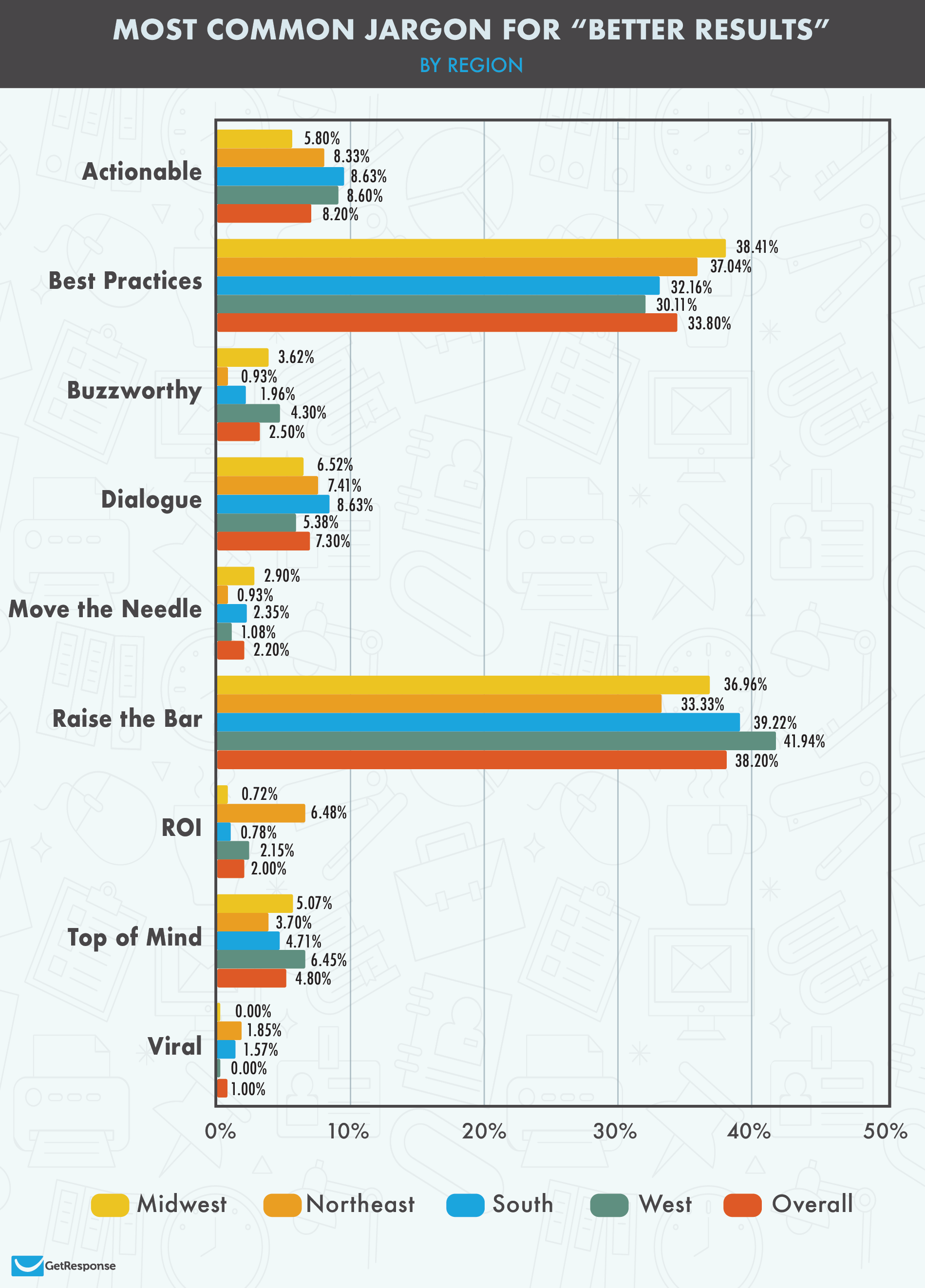 Perhaps, people get irritated by hearing the words “best practices” because it’s a reminder of rules they choose to ignore. In fact, more than half of email marketers send the same email to all recipients. 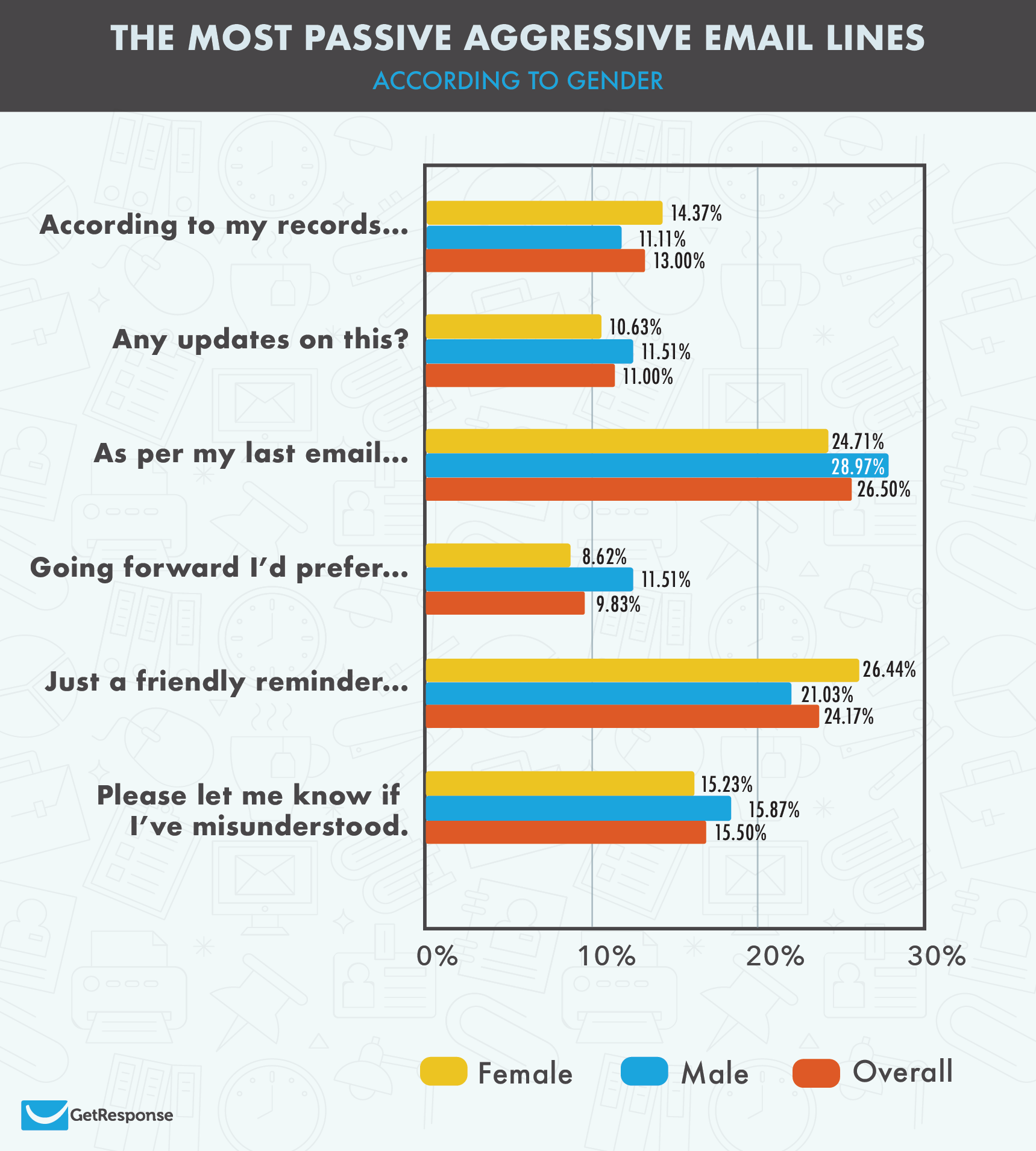 It’s easy to be frustrated when a client or coworker asks a question you’ve already answered, and even though you can’t say, “if you read my last email you’d know”, it’s very tempting to do so. We asked what people say to nudge people to read things more thoroughly and the results differed slightly between men and women. For the most part, however, they agreed “As per my last email…” and “Just a friendly reminder…” were the most appropriate phrases for this situation.

28.97% of the men surveyed were more likely to respond with “As per my last email” as the most passive-aggressive sentence while 26.44% of women were most likely to respond with “Just a friendly reminder” as the most passive-aggressive sentence. Of course, there’s nothing like a good “Please let me know if I’ve misunderstood” or “According to my records…” to express irritation according to about 15% of respondents in each category. 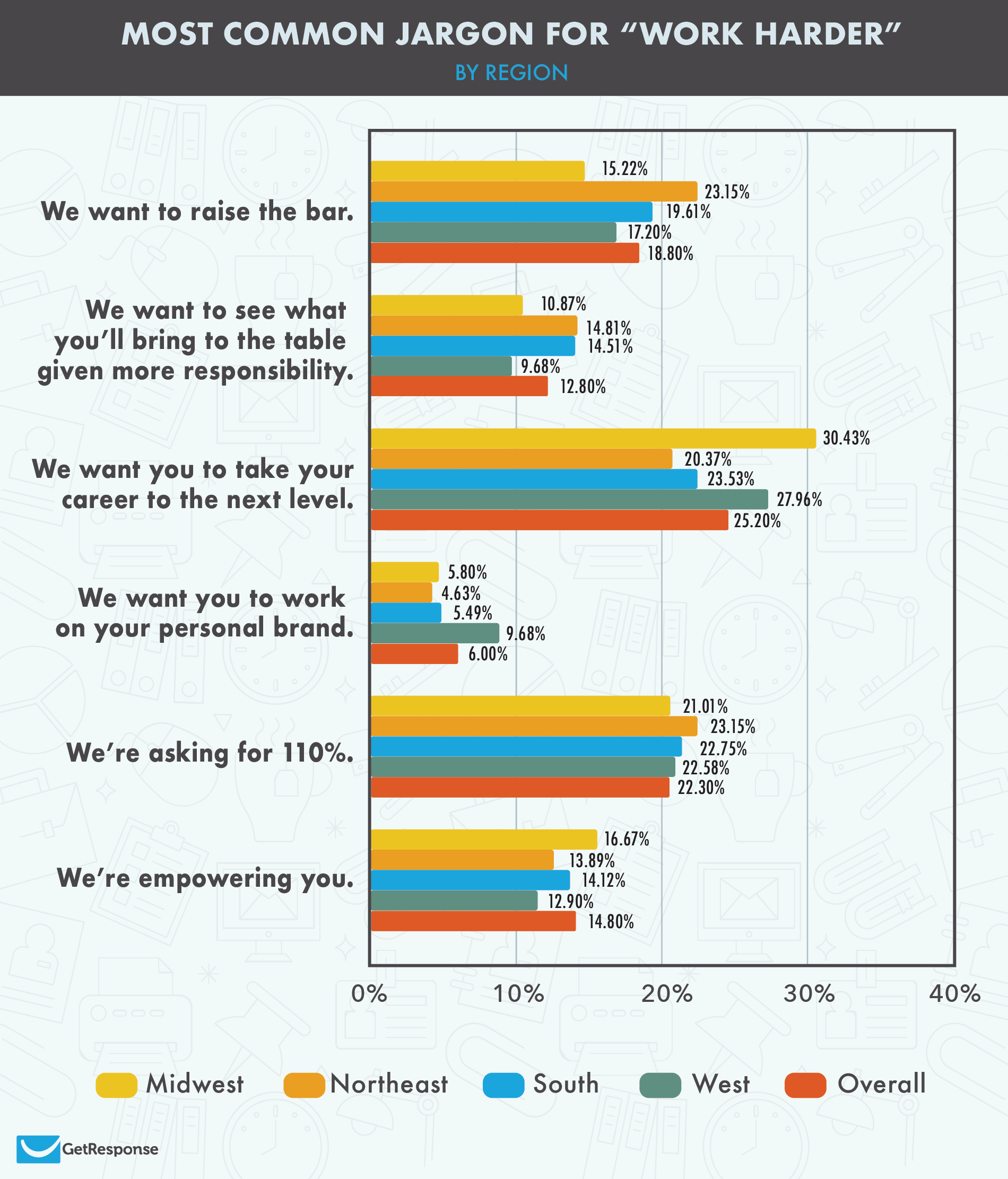 It’s pretty rare for an employer will come out and say, “We really need you to work harder, but we’re not going to pay you more for it”. However, we’ve all probably been on the receiving end of a carefully phrased sentence masking that request. The most common phrase respondents saw was “We want you to take your career to the next level,” with 30.43% of people in the Midwest and 27.96% of people in the West seeing this phrasing the most. The response that was seen a nearly equal amount by respondents around the country was, “We’re asking for 110%.” You know, because 100% effort just isn’t enough. 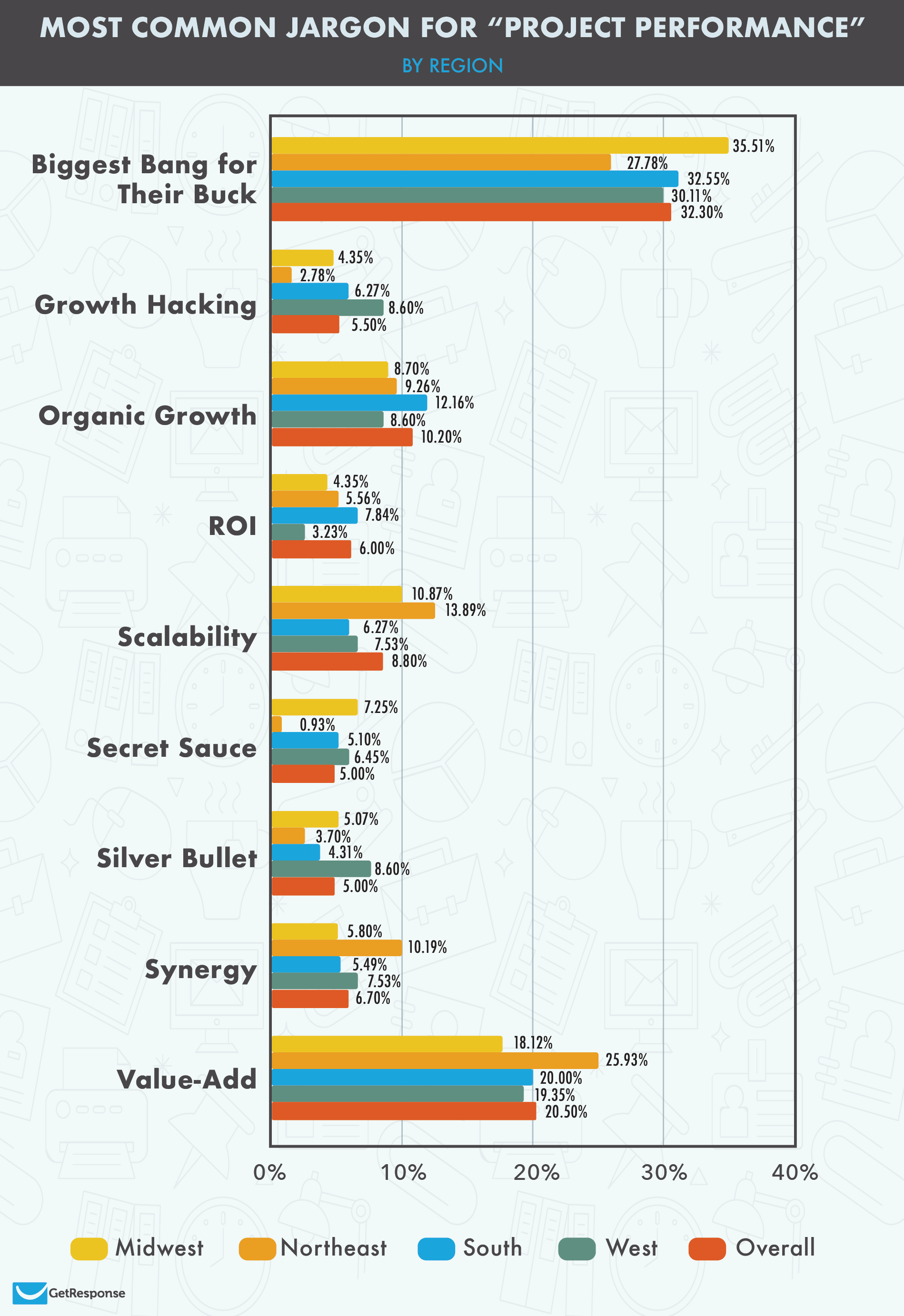 Common jargon can also be heard in discussions with clients to boost credibility. The most common phrase respondents heard in these meetings was “biggest bang for their buck” and was followed by “value-add.” 35.51% of people in the midwest were most likely to hear “biggest bang for their buck” and they were also most likely to use the term “secret sauce” out of the four regions. 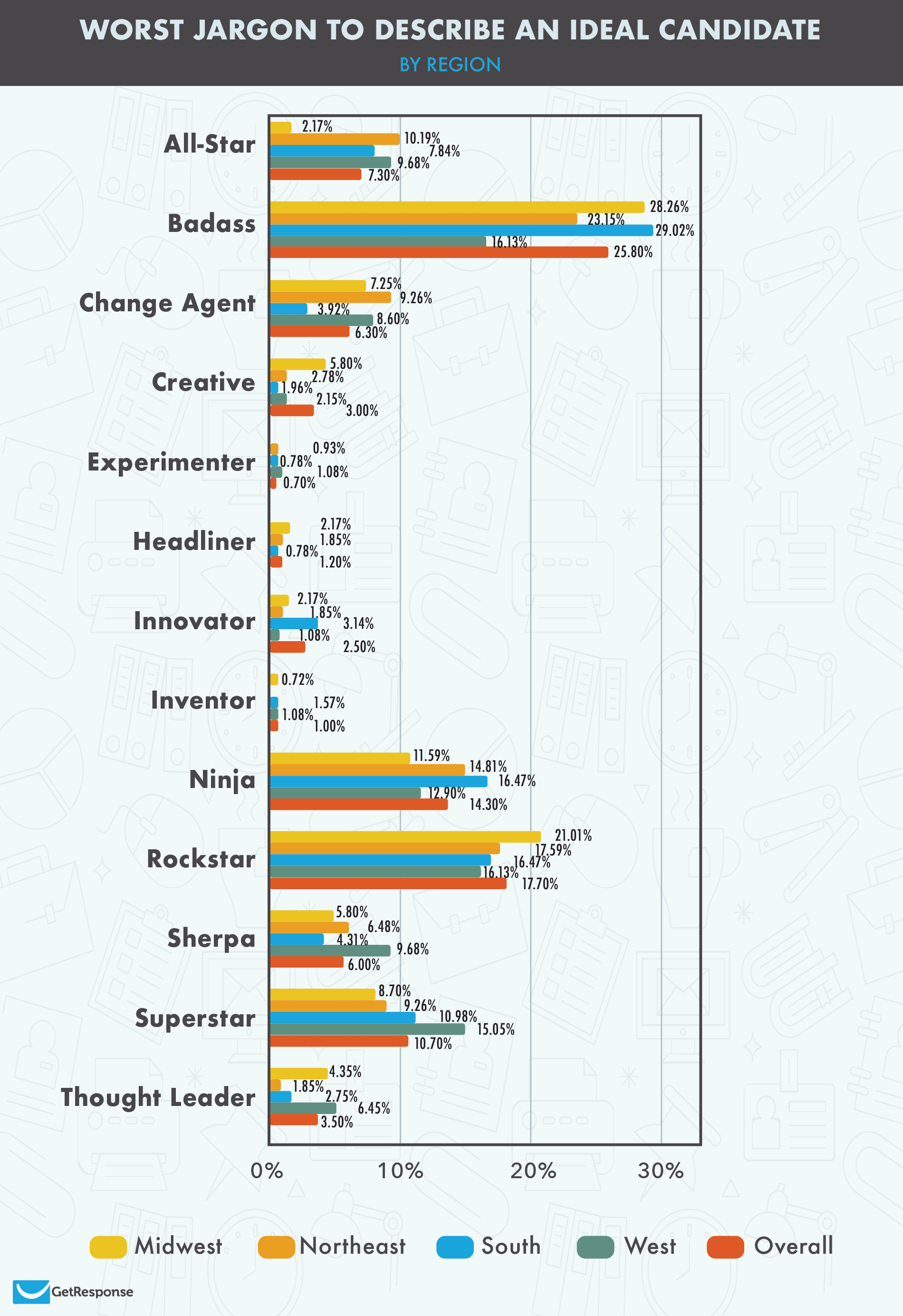 If you’ve ever seen a job posting, you’ve probably noticed certain phrases that describe the employer’s ideal candidate that made you cringe. We asked our respondents what their least favorite term was for a job posting and the majority thought “badass” was the worst by far. Other terms our respondents picked were “ninja,” “rockstar,” and “superstar.” An equal amount of respondents in the West found that “badass” and “rockstar” to be the worst descriptors. Interestingly, nearly one in ten people in the West have seen “sherpa” in a job posting. 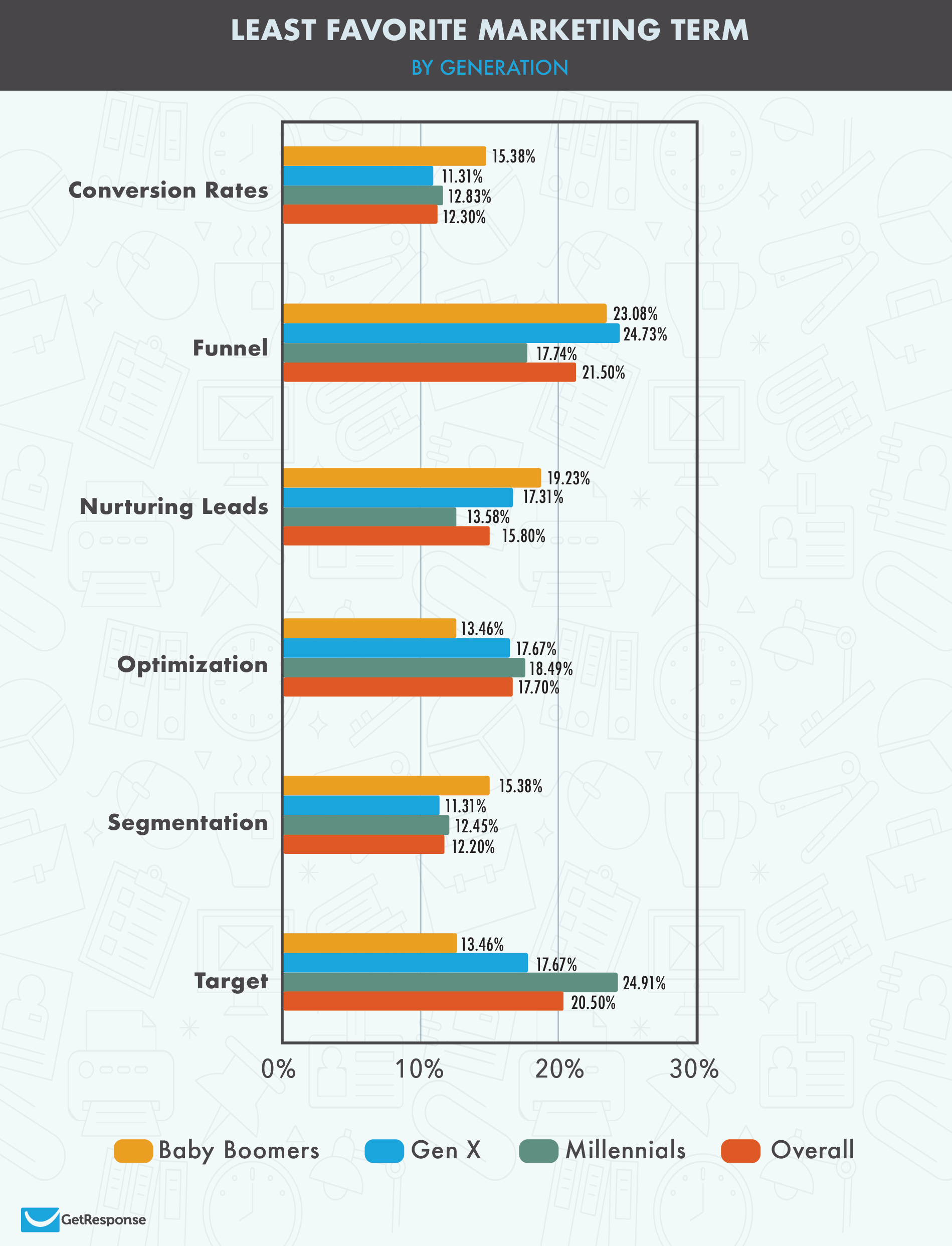 Though it seems funnel is the least favorite jargon word among certain groups, there is a big chance that it will become the most beloved one!

GetResponse has recently rolled out Autofunnel – a tool with which you don’t have to speak any jargon, or know the big marketing words – it simply guides you step-by-step through creating a sales / marketing process, doing work for you. No coding required! 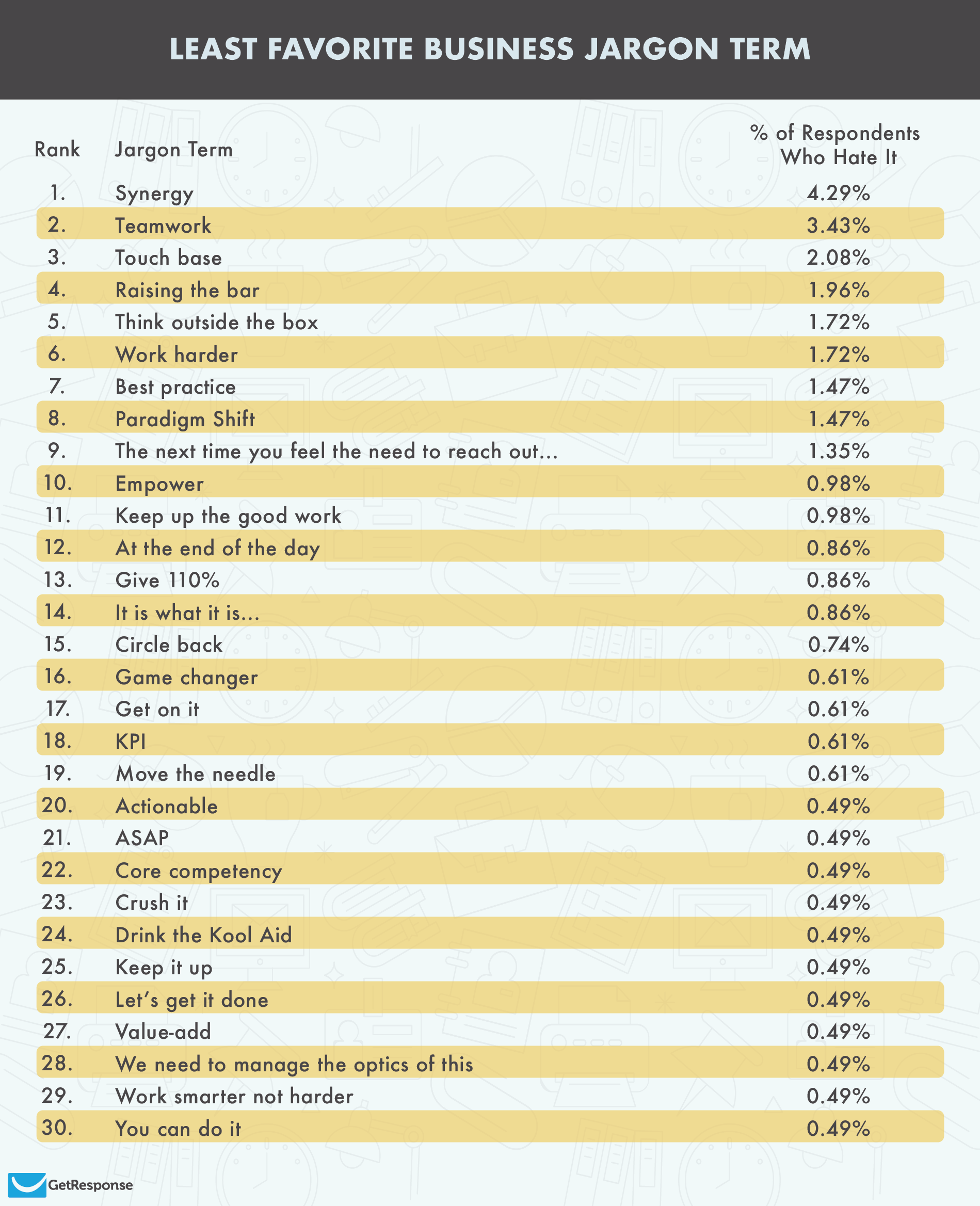 Respondents were also asked to tell us their most hated jargon terms to hear in any context. “Synergy” was the term that was most commonly picked. After “synergy,” the next most commonly picked term was “teamwork,” followed by “touch base”. Other hated terms that were picked included “think outside the box,” “work harder,” and “best practice” among many others.

You can’t escape most of these expressions in the workplace, and their usage is usually justified. Some are perfect to describe what your goals are, what your brand is like, and who your audience is. But, if you find yourself using some of these phrases too often, you may want to change up how you’re speaking to your colleagues and clients.

Once you’ve tweaked your communication, you can safely use GetResponse and it’s solutions to maintain your relationship with customers, without the fear of irritating them ;).

Let us know in the comments which of these buzzwords are you guilty of using the most in your business communication. And, if there are any other phrases marketers use that make you roll your eyes! 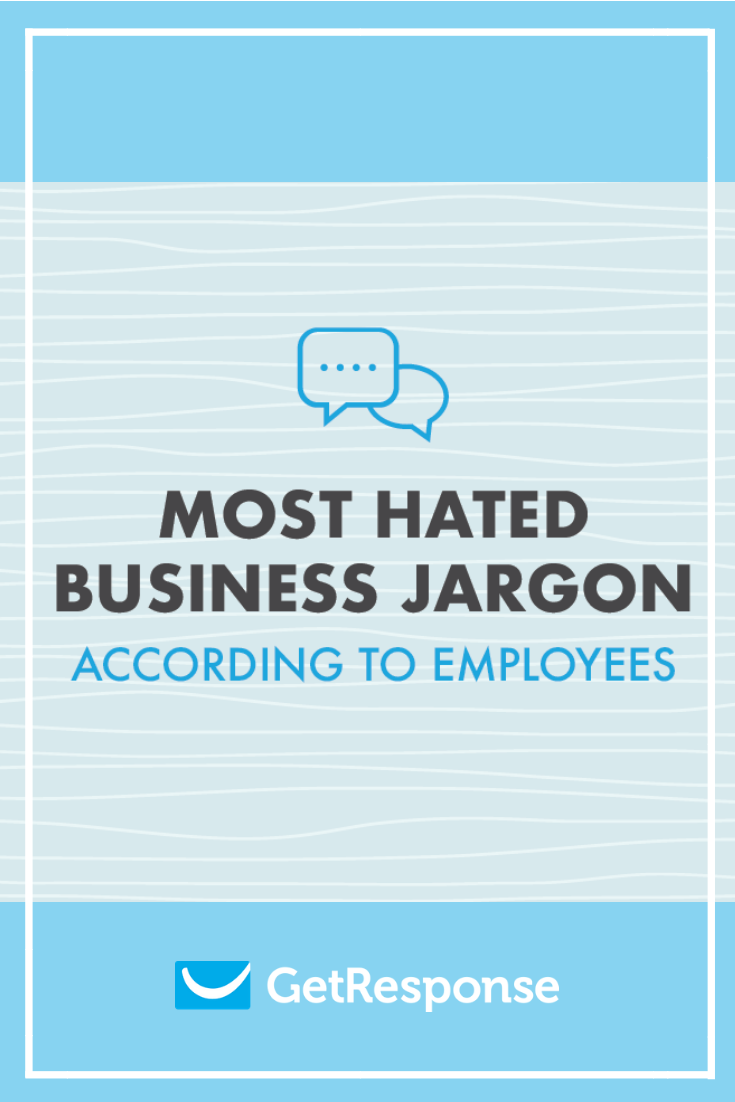